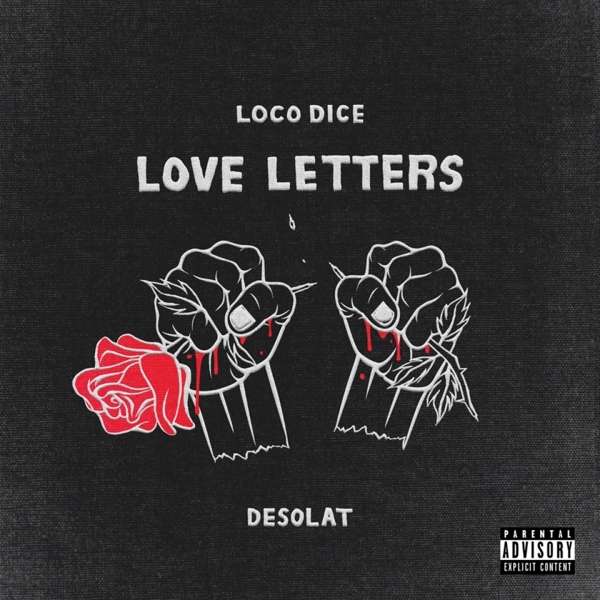 Loco Dice has unveiled his darkly eclectic album „Love Letters“, a 15-track embodiment of his diverse production range. Featuring the latest single „We’re Alive“, the most highly anticipated record of his recent sets.
Dice’s third studio album after „7 Dunham Place“ and „Underground Sound Suicide“ sees him reflecting on his musical influences and connections to Dusseldorf and beyond. The album is packed with the producer’s typically forceful tones, which blur the lines between house and techno. Utilising the bristling sounds and smooth drum beats, Dice’s “Love Letters” album serves as an aural embodiment of the tones which make his sound so unique. Throughout „Love Letters“, Dice uses his own vocals more frequently than on previous albums, which makes the production both trippier and more personal, representing past and present.

Addressing his listeners via special sleeve inside the 3×12“ vinyl album edition, Dice writes:
“It’s been a while since I’ve released anything in the form of an album.  This time everything happened differently than my previous albums where I had the story or the concept first and where the music was my soundtrack to that story.  This time the music came first – making and collecting music, having a good time in the studio without any pressure.  It was not clear at all what to do with all this.  To release it or not, if I have club 12” singles, or if I should just keep everything… but it felt good.
I looked around me and started to let only positive vibes into my surroundings and after I finished producing the 1st single “Roots”, everything came together.  The missing link was there. It was clear to me that this is an album that belongs on my label, Desolat. The music on “Love Letters” is filled with the positive energy and love that I have received around the world.  Every piece on this album is like a mini letter.  A Love Letter.”

With a trio of collaborations on the album, Dice drafts in Serious Klein on „Selflove“, Willam Djoko on „Out Of Reach“ and Eddie Fowlkes on „D Town Playaz“.  As someone who is deeply influenced by genres like soul & funk, Dice invited German-based artist Serious Klein – who’s work he has been following for the past while, to his Daddyscrib studio and a perfect blend was formed that was not only basted on their mutual African roots.  When „Out Of Reach“ began to take shape, it was clear for Dice that only the Amsterdam’s finest – William Djoko, could provide the final shape he envisaged on the release.  The third feature on the LP comes from Detroit godfather Eddie Fowlkes on the appropriately named „D Town Playaz“, which features both of the artists’ vocals and serves as a teaser for the things to come.

Continuing to headline the biggest clubs and festivals around the world, Loco Dice has directed his endless passion and musical sensibilities to bare upon his Desolat label, with a stream of records released from some of the most exciting artists around and supported by DJs across the globe.

The release of „Love Letters“ marks Dice’s latest studio album which will be available via digital format as well as 3 x 12” vinyl release on Desolat.